Researchers have developed a non-expensive way to coat carbon on lithium metal oxide electrodes for lithium-ion batteries. The life of the lithium-ion cells prepared using these electrode materials is expected to be doubled due to protective carbon coating.

Lithium-ion batteries are the most commonly used power source for electric vehicles. However, its penetration to the daily usage against gasoline-based vehicles require drastic improvement in the lifetime and cost as well as mileage per charge. The active components of lithium-ion batteries are cathode, anode, and electrolyte. While commercial graphite is used as anode, lithium metal oxides or lithium metal phosphates are used as a cathode in Li ion battery. The electrolyte is a lithium salt dissolved in organic solvents.  The capacity of the lithium-ion battery determines the mileage of the electric vehicle. Before the capacity reduces to 80%, the number of charging cycles determines the life of the battery.

Carbon being inert to most chemicals and stable under the operating window is the best choice of coating material to improve the cyclic stability of the active materials. Carbon coating on the active materials can double the lifetime of the lithium-ion cells.  However, coating carbon on lithium metal oxide is very challenging, because of the difficulty involved in coating carbon during the synthesis of lithium metal oxide material in a single step.

To address this issue, researchers at the International Advanced Research Centre for Powder Metallurgy & New Materials (ARCI), an autonomous institute of the Department of Science & Technology, Govt. of India, have developed a technique to coat carbon in situ on lithium transition metal oxides in single step while synthesizing the oxide itself. Generally, carbon is coated on oxide materials using a second step, which is not uniform and is expensive as well. In ARCI method, a carbon precursor is trapped in between the transition metal hydroxide layers to minimize the reaction with oxygen even when heat-treated in the air during solid-state synthesis. Uniform carbon coating on the lithium transition metal oxides –LiNi0.33Mn0.33Co0.33O2 (NMC111) was achieved through this technique.

The electrochemical performance of the lithium-ion cells constructed using carbon-coated NMC111 is at par with that of the commercial lithium-layered oxide cathodes. Superior cyclic stability of the carbon coated product with capacity retention of more than 80% after 1000 cycles of charging/discharging is demonstrated with an optimum carbon thickness matching commercial samples. The researchers at ARCI expect the electrochemical performance to improve further once the lab-scale batch process is replaced by the continuous process to enable the process to be commercially viable. 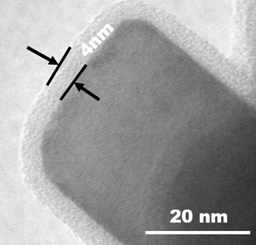 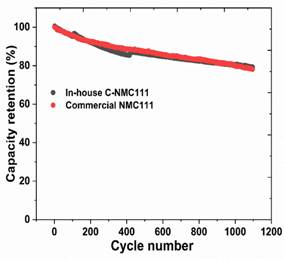 Fig.1 (left): A high resolution of transmission electron microscopy of one of the particles showing uniform carbon coating (right): Electrochemical characteristic of ARCI developed C-NMC111 in par with commercial material.

ClusterWall: the Digital Platform That is an Asset for Civil Construction